***Update August 12: It appears the PowKiddy X28 may be close to releasing. No official release date announced but it could be soon...

Game handheld releases are hard to predict due to supply chain problems and parts shortages, so most release dates should be considered tentative not concrete.

KT-R1C (aka KT R1C) is currently on pace for the metal versions to possibly be ready for pre-order by mid-month and ship out in September. There is no firm date set as of now. This handheld has quickly made it to the top of my most wanted device list recently.

The Miyoo Mini V2/V3 shortage continues but Miyoo is expected to do another restock on the Official Store mid-month. FYI: There's no difference between the V2/V3 other than the V3 shipping out with a more updated firmware.

The Miyoo P60 was expected to already be out by appears to be in some sort of software testing hell loop. Information from Miyoo has been very minimal, so I wouldn't count on the highly anticipated P60 being available this month but it's possible.

The Retroid Pocket 3 seems to be on pace for some type of full reveal in the near future. We've seen a tiny glimpse of the prototype Taki has and it looks sleek. Rumors are swirling that it might not have the same SoC as the Retroid Pocket 2 Plus as originally expected. I find it unlikely that the RP3 pre-order becomes available this month but I'm sure we'll hear something about it soon.

[UPDATE: The Retroid Pocket 3 Pre-Order was announced to start on August 4 9PM EST!!

Other potential pre-order/order appearances for devices include the PiBoy XRS, and Retro Pixel Pocket.

The GPD XP Plus pre-order is over and expected to ship out at the end of the month. GPD XP Plus units reportedly have started shipping out as of 8/11/22.

Nintendo Switch OLED Splatoon 3 Edition drops on 8/26. Unfortunately, the scalpers are already all over this reserve. SMH. 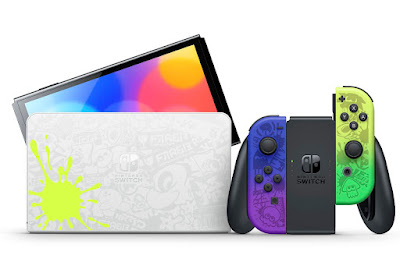