Elden Ring Does NOT Need An Easy Mode 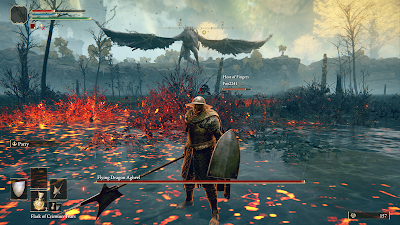 One thing that we heard a LOT with the Souls games is that there should be an "easy mode", but I think that would completely ruin the souls-like genre. Elden Ring was designed by Hidetaka Miyazaki to specifically require gamers to use trial and error to overcome the difficult enemies. In a lot of ways this is simply a throw back to old school gaming where figuring out patterns was how you beat games.
When it comes to games,  action combat is probably one of my weakest areas,  but I did beat Demon's Souls, Dark Souls and Dark Souls II in the past. I was getting destroyed my first day in Elden Ring, got a little better on the second day,  and even better on the 3rd day of playing. I'm still a long ways off from beating the game (I'm only 8 hours of gameplay in), but I'm happy with the difficulty. Beating this game will certainly be a great feeling.  I'm currently at level 20 and steadily progressing despite not being that great at the game.
The three main reasons I think there should NOT be an easy mode for Elden Ring are:
There's a lot of articles out there like the one from The Daily Beast (link below) that may mean well, but tend to discourage people on the fence from jumping into these kind of games. The best reason to play a game like Elden Ring is that you will get good at the game with practice and patience!
https://www.thedailybeast.com/elden-ring-is-a-gaming-marvel-but-why-is-it-so-damn-hard