We have definitely reached the point in retro handhelds where no one has the time and/or money to pick them all up. Between the Retroid Pocket 3 and the Anbernic RG-552, I'm likely picking one of the two up at some point (probably not at launch for either but at some point next year). These two handhelds will likely be strong competitors. I'm leaning RG-552 for the screen but we'll see...
I'll already be fairly busy this December/January/February with the Steam Deck, and Retroid Pocket 2 Plus.
Price
Final prices are not confirmed yet.
Release Dates
Anbernic RG-552 is expected to become available for order/pre-order as soon as November 11, 2021 but that is not confirmed. Retroid Pocket 3 is also expected to become available for order and/or pre-order at some point in November.
Screen (Winner = RG-552) 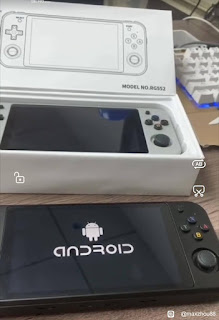 Anbernic RG-552 is expected to run Android 7 or Batocera out of the box.  The RP3 is expected to run Android 9.
Performance (Winner = RP3)
Both will be very capable handhelds but the Retroid Pocket 3 should slightly outperform the RG-552. The RP3 and RG-552 should run up GameCube emulation fairly well and the RP3 has enough power (unlike the RG-552) to run "some" Wii emulation.
Build Quality
We haven't seen enough of either handheld to figure out which one will have the best build quality but given Anbernic's track record, I would guess the d-pad and button action on the RG-552 will likely be a little better but there's no way to know for sure yet...
Keep an eye out for both of these upcoming handhelds at:
Anbernic.com
GoRetroid.com