March 02, 2021
TRIMUi Model S
Aka PowKiddy A66
*Update: The original score here is using stock firmware. With hard work from Shaun Inman and others using custom workarounds (MinUI, GMenuNX), I bumped the score on this handheld up to 7/10. The work done on this handheld by community developers has drastically improved it over time.
*Update August 2021
3D Printing Option to Improve D-Pad:
https://www.retrokezins.com/2021/08/mod-find-powkiddy-a66-trimui-model-s-d.html
*Prounounced like Trim-U.I.* 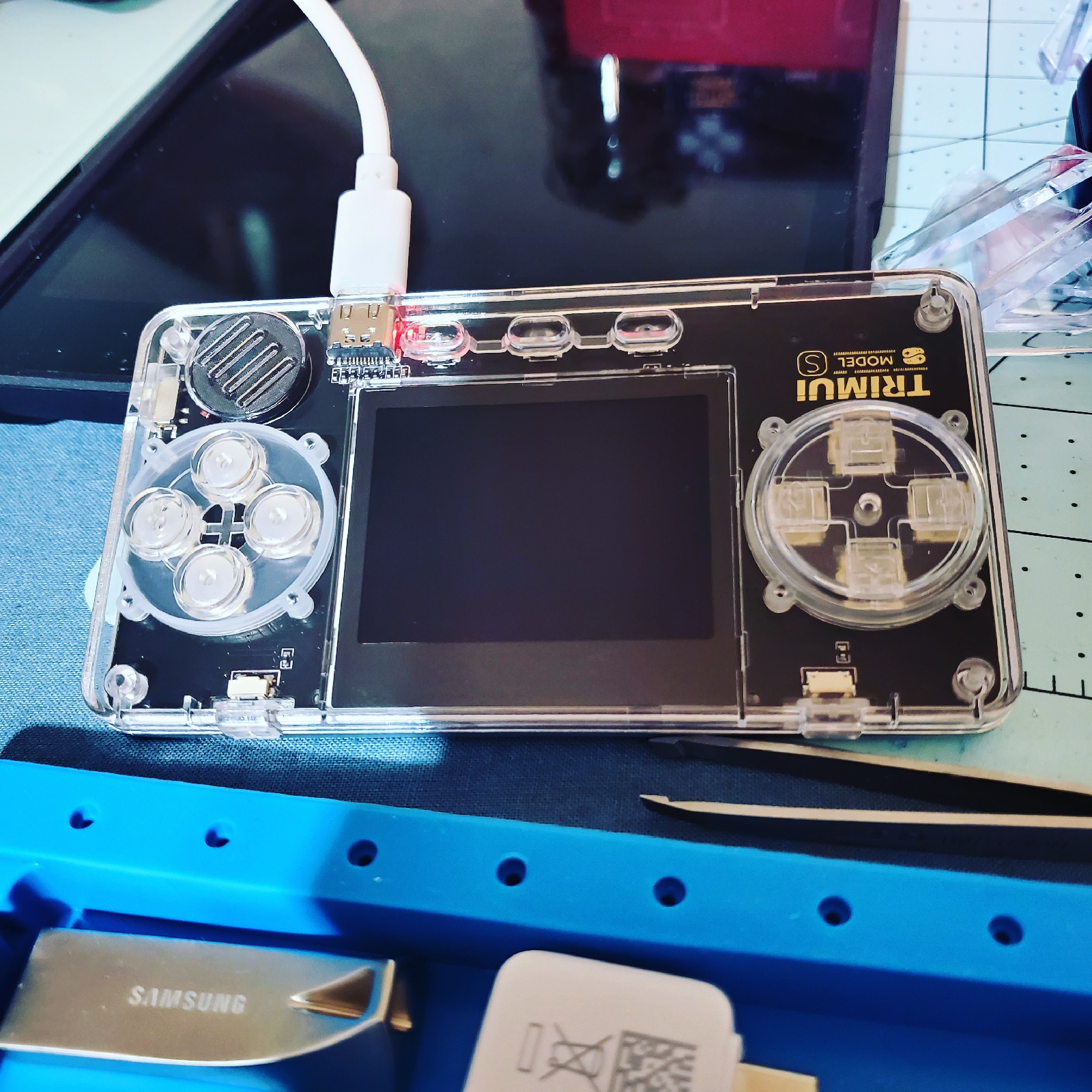 Due to the nature of this type of handheld,  my review score is broken down 3 ways. If you aren't interested in tinkering with this one quite a bit to get it going I'd avoid buying one. If you do like having to mess around with systems it does have some value. Review based on the console as it stands at the end of February, 2021. There's always the possibility it could get better.
Out of the Box: 3/10
Latest Firmware: 4/10
Custom Firmware: 7/10
Price Paid: $49.99 @ retromimi.com
Price I Think It Should Be: $20-$40
Best for Playing: NeoGeo
I had high hopes for this slightly unusual handheld but this time my hopes didn't really pay off.  I did enjoy quite a few NeoGeo games on it but that's about it.
The Good
The screen despite only being 2 inches looks good and bright (at least on the surface).
The UI is clean but doesn't have many options. Outside that the nice thing about the TRIMUi Model S is that the packaging looks premium and the physical build is solid. It looks great and is built to take a beating. There's no safe shutdown and the system is very prone to files corrupting as a result and menus resetting etc...
I surprisingly really like the feel of this system. It's easy to play even with big hands despite it being about the height and width of a credit card. The d-pad and fsve buttons are very "clicky" but they are responsive and work well. The tiny R and L buttons are not very good though.
The Bad
The screen while it's certainly bright and has rich colors suffers from very noticeable screen tearing and lag. The apparent problem lies somewhere with the screen driver not working well with emulators or the system. Fixing the drive is something well above my head. Using the latest firmware that was released on the website February 9th, 2021 does fix some things but also made some things worse. There is potential for this micro handheld but it is far from realized and I lost my patience with it. There is some custom firmware work being done on the system that improves things but the main problems still exist.
Emulation is very hit or miss with the TRIMUi and whether you should buy it or not depends on which platforms interest you. The screen tearing issues are so bad it makes a lot of games unplayable in my opinion. Normally I can deal with a bit of screen tearing but with this screen it's so bad it nearly causes eyestrain and motion sickness.
The sound is pretty bad with the tinny speaker which normally wouldn't be a big deal to me because I'd normally use headphones. This one has no headphone jack or Bluetooth option. I tried using a pair of Samsung USB-C headphones with it and it wouldn't work.
Emulation Grades
(Based on expectations from a $50 handheld)
NES: C
SNES: D (Often entire layers in games will not appear)
Gameboy: F  (Screen Tearing)
Gameboy Color: F  (Screen Tearing)
GBA: D (GBA runs far smoother than GB and GBC but just looks a little weird on this screen)...
MegaDrive: C
GameGear: C
Master System: D
PC Engine: C
Arcade: C (arcade is a real hit or miss experience with this device). Some arcade games run great and others have the screen problems.
NeoGeo: B
For whatever reason NeoGeo games mostly play really well on the TRIMUi.
PS1: D
Most PS1 games are horrible on this system and will crash but occasionally some games play fine. It's hard to tell what causes this because there are some 3D intensive games that play great and then there are simple games that don't play well at all. I assume this is related to the screen driver problem.
The above systems are the only ones I tested. Some people have had success with other platforms that were added custom.
In The End
In the end I really wanted to like the TRIMUi Model S so my 4/10 score might be giving it more credit than I should. The build is great, it looks great, and it's very pocketable but that's about it.
Word is that the manufacturer is working on an Model S 2.0 console with upgrades to the processor and a better screen/screen driver combo but that doesn't make me feel too confident when the first one never met the potential it had. That's the risk you often run with first runs runs of new devices so I'm not devastatingly upset about the purchase but I definitely cannot recommend it in good faith to anyone.
Unfortunately there's not a big community for the TRIMUi but there are a few people you can find on Discord experimenting with it.
Trimui.com
Better Option
Powkiddy V90  (often $10 to $20 cheaper)